Baglietto shipyard can celebrate another achievement -the fifth of the year- just after the sale of the two DOM 133, announced in the last two weeks. The new 52m hull no. 10240 is the sistership of hull 10238 and bears the sign of Francesco Paszkowski Design both for the exteriors and the interiors, the latter in collaboration with Margherita Casprini.

The T52 design – the Baglietto displacement line of motor yachts just below 500 GT – draws inspiration from Baglietto’s tradition – preserving its most classical stylistic features – but reinterprets it in a modern, contemporary timeless key. As her sistership, hull 10240 is characterized by significant design innovations both forward and aft. The stern has been completely restyled and is now open, with a beach club on three different levels.

The large pool can be “hidden” by an original up/down moving flooring system extending the deck space when not used. Inside, the salon’s floor-to-ceiling glazing ensures a constant contact with the sea even when living indoors. In particular, the Beach Club is brand new in this vessel; the lower deck SPA includes a sauna and an amazing gym open on the sea thanks to a side door.

Baglietto T52, the superyacht features the sky lounge  on the upper deck

Definitely worth a special mention is the sky lounge on the upper deck, which can be opened on three sides, leaving the windows completely concealed. The extremely large Sun Deck (almost 24 metre long) is a typical characteristic of Baglietto, definitely a space above any yacht of similar size and volume. 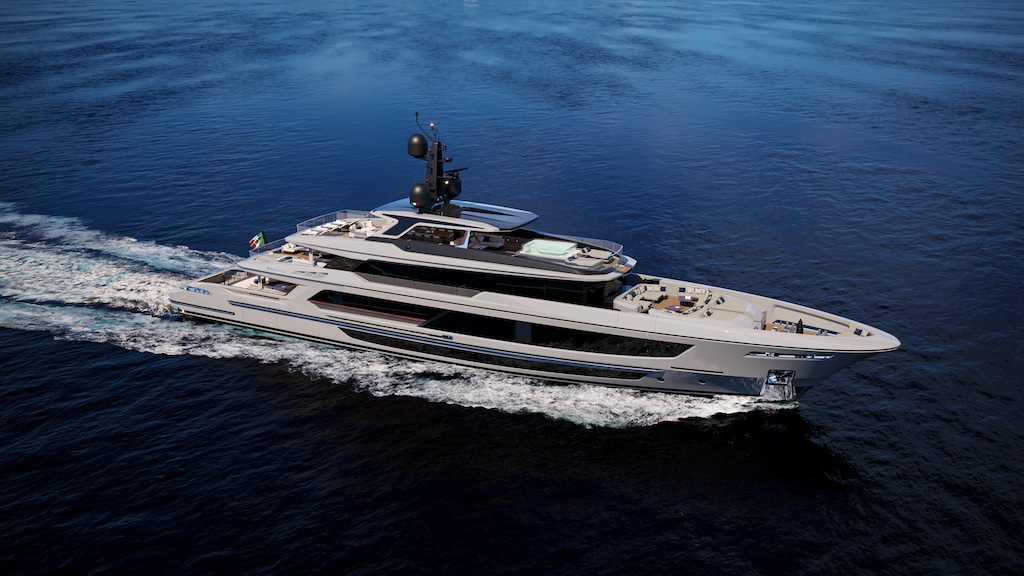 The yacht is equipped with two Caterpillar C32 engines which allow a top speed of 16 knots. As the yacht’s construction was started on speculation, the delivery to the Owner is scheduled in 2023.
“The sale of the second hull of T52 represents an important confirmation for us – states Fabio Ermetto, Baglietto CCO- We strongly believe in this design that perfectly meets the needs of the market, and we are convinced that it can represent the perfect reference in the superyacht segment ranging between 50 and 55 meters” In total, there are eleven projects currently underway at Baglietto’s two production sites in La Spezia and Carrara: the two T52 yachts, the 48-metre hull 10233, the 38-metre hull

Arcadia A115, the launch of the fifth unit