Heading to starboard, the Daydreamer now looks not so far the land, the port of Capraia. A peregrine falcon seems to be marking the trajectory of the upward currents that come across the spur that protects the harbour, dominated above by Fort St. George. The inlet of the port is inviting and the way it delimits the sea makes it look like a ballet slipper on which to continue the gait of this body of water that the Daydreamer represents for us.

Capraia, or rather “Capraghja”, is pronounced here in Capraiese dialect with those high-pitched vowels, a reminder that the sea separates it from other coasts by only 21 miles in the Corsica Channel. And even its fishermen carry that original ancient language on their lips, since Capraia was part of the Kingdom of Sardinia with the Savoy family in the 19th century, and changed hands after the English occupation of 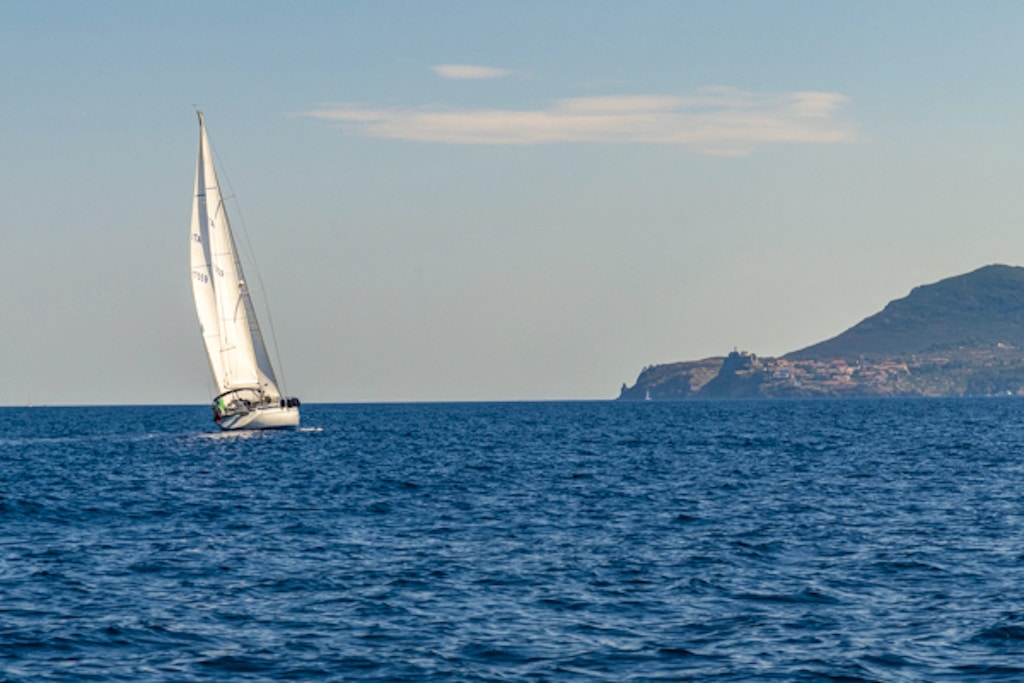 1814; those same Anglo-Saxon sea wolves who seem to have flown the Genoese flag courtesy of the Maritime Republic. And Capraia also because, not trivially, wild sheep were here in cohabitation with the monk seal, which has unfortunately gone estinct. the 16th-century Fort St. George, instead, belonged to the Genoese who wanted Capraia a Ligurian island for a period of time, and in the fortress they worked for resilience through reconstruction that put an end to the imperious destruction wrought by the corsair Dragut.

Caprais: history and nature as its land accumulates over the centuries from the ashes of a vulcano that sculpted it like a rocky Mediterranean turtle. The lava flowed from the main cone, which can be still seen when the boat laps the coast near Cala Rossa. That is how it is: the power of the volcano means that it should be admired with religious respect, leaving this corner of paradise untouched.

Hephaestus controls it and it is certain that he prefers sailors to wayfarers, because the cliffs are sheer above the sea, high and rocky, with no sand to soften their profile.

Capraia is for sailing, circumnavigating it while talking philosophy and rhetoric. Capraia is rummaging through its secrets, approaching the surface of the water, silently among the caves and inlets, looking at the stony spires where you can read the geology that shapes it. On the cliffs there is still the red that fades into dark black: it is the lava as it struggles to complete its mutation in the virgin earth that wanted to increase the surface of this island, whose perimeter of thirty kilometres is really far from the Boot. Capraia, in fact, is the most offshore island of the Tuscan Archipelago, and to the north it is the head of a series of jewels pitted on the sea by God himself: Elba, Pianosa, Montecristo and Giglio. Amongst the coves and inlets, creeks and inlets, there are dozens of ways to look 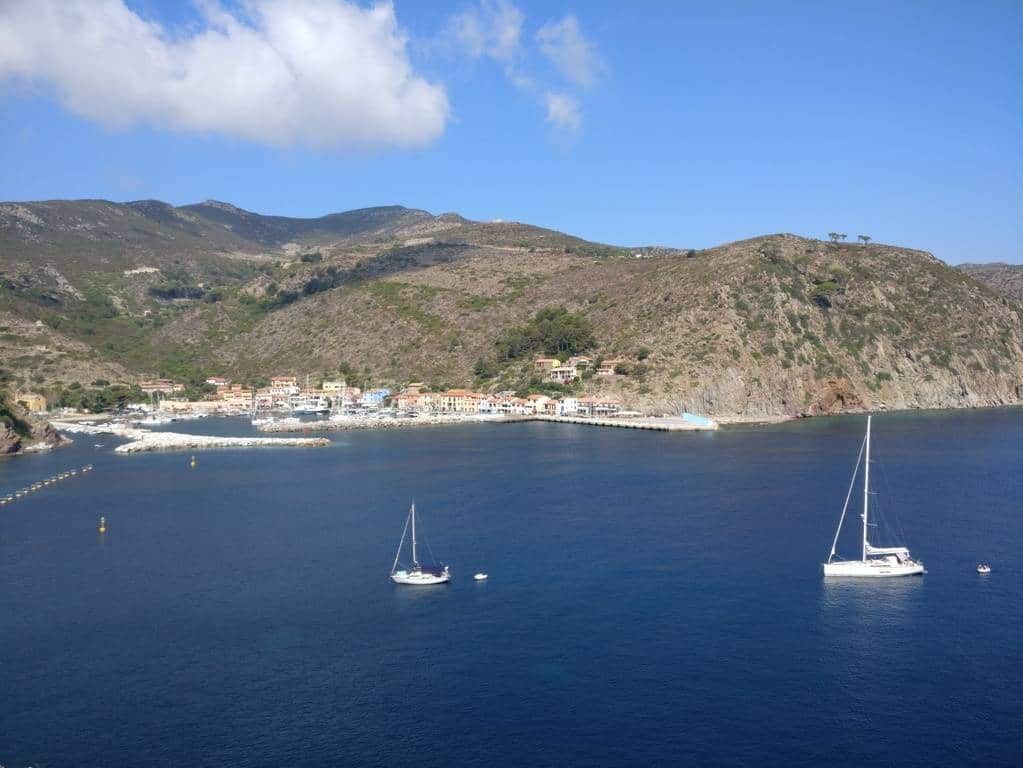 at Capraia through its many facets, which expose it to the sea on which it points imposingly from the different coordinates that mark it on the wind rose: Scòpoli, Barbice, Patello, Cote, and more. In order to support the view and orientate oneself in the archipelago, the forge of Hephaestus has dropped a few tears of lava on various inlets: Formiche, Manza, Peraiola; and looks at the rocks of Capra, Gatto, Menaglia, Mosé, Reciso and Scoglione.

Marina di Capraia, managed since 2003 by So.Pro.Tur,in addition to a wide range of services including water and electricity on all quays and satellite receptor sockets for boats of all sizes, offers a multi-buoy mooring berth which can accommodate at least 40 boats up to 20 meters long, in the period between May and September. The buoy field is located just at the entrance to the port and guarantees “stability and safety even on windy days”.

It is an extra service, especially useful during the high season ( July and August) when mooring in Capraia is really hard. Moreover, mooring is free in the bay in front of the port entrance, which itself can accommodate over three hundred boats.

Rates in the high season range from 15 to 240 euros per day, for boats up to 20 meters long, while the buoy field ranges from 25 to 150 euros for boats up to 23 meters long. Those who opt for this type of accommodation should bear in mind that the buoy field is not reserved for mooring, but it is necessary to contact the port by phone before 2 p.m. to announce their arrival.

The VHFchannel is number 69. A valid alternative is Cala del Ceppo, an ideal anchorage for a different kind of anchorage on the island that once belonged to the pirates. Here the seabed is a maximum of six metres deep and at least two metres, sand and Posidonia make up the water, which shines through in its beauty and distinct colour. We are also on the wildest side of the island, but be careful because if the libeccio (south-westerly wind) rises, the situation can become unpleasant and the anchor can be sent away, so it is better to give more line when anchoring, as the water is completely transparent and allows you to locate it well.

Safeguard and protection of the marine park

It is the Tuscan Archipelago National Park that protects the island to the delight of sailors. Turning towards the western side of Capraia, on the cliffs that give way to gravity, sculpted like a panettone, you will find the living fossil of the dwarf palm. Capraia’s flora is rich and varied, and its scents are as enchanting as a balm fading on the Mediterranean winds.

The seabed must be admired by free diving, or for the more daring with scuba tanks, because the island’s underwater paradise is not lacking in marine life, especially in the shallowest areas near the coast. Special creatures are protected by the water that combines a living element with starfish, huge urchins, groupers, murres and bream. A book to discover on board, in the dinette is “Capraia sott’acqua (Capraia underwater) by Marco Lambertini, perhaps sipping wine from the Piana, the only flat area on the island. And then we plough through the water with our Daydreamer’s heavy strides to Cala di San Francesco, in search of mystical inspiration that the nearby St. Anthony convent powerfully evokes.

Again baths, sun, the saltiness tingling on the skin and the feet rediscovering the hardness of the earth’s friction, but the gaze continues to rejoice over the pretty little village that invites a continuum to the lighthouse, then swimming in an increasingly hybrid body equipped with fins and snorkel, swishing neatly over Punta Fanale or even 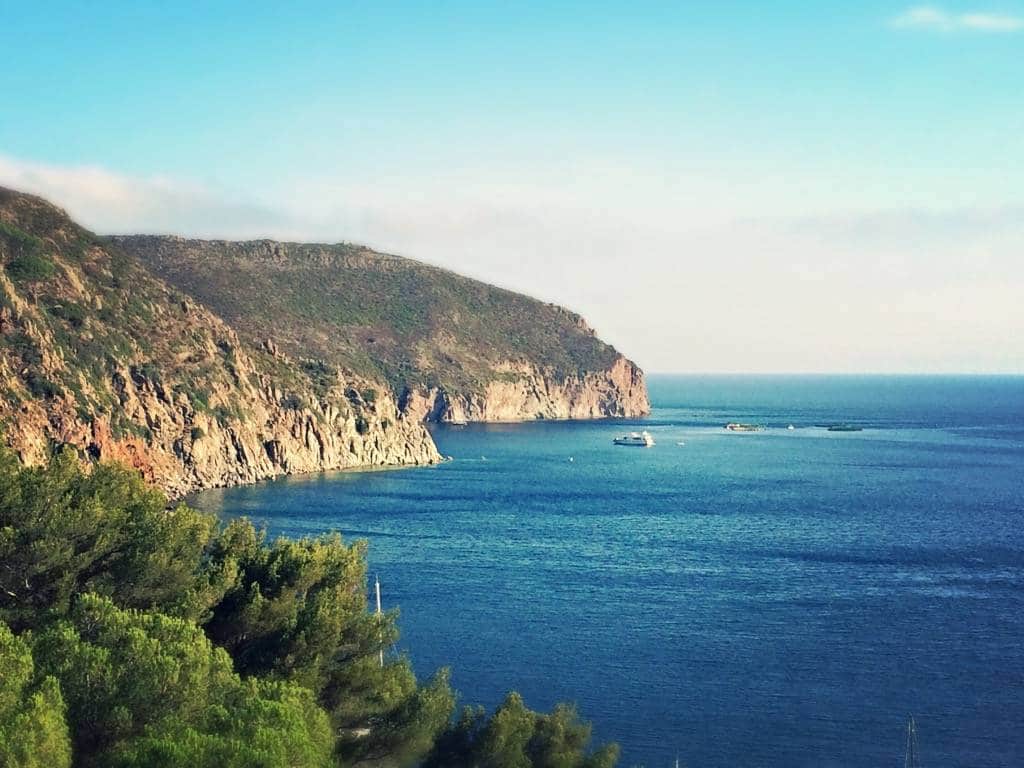 as far as under the Castle to look at the Torretta del Bagno, reached on foot via a steep path when the Scirocco doesn’t bother you too much. Boulders like sea bones surround Cala dello Zurletto, which is guarded by a towering rock, a multitude of fish dart about underneath and the water is crystal clear, there is nothing else to disturb this Zen-like peace. Sailing around the island again on the shadier north, here is Punta della Teglia and the cry of its herring gull colony discussing in council at the top of a flight of rocks. The liquid element becomes turquoise, like a purifying mirage, surrounded by the purple colours of the rock that protects it. And the night finally comes: we, and the others, dozing in the anchorage among the yachts‘ lanterns, watching Hephaestus move southwards to his original island of Vulcan.