Atomic3, available at the Yacht & Service point of sale in Marina di Varazze, is the only device in the world what sanitizes both the environments in the presence of people and the water contained in yacht tanks. 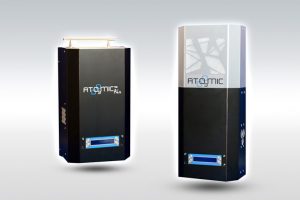 The “atomic revolution” starts at the Marina di Varazze. At the Yacht & Service point of sale, along the main quay of the famous Ligurian recreational port, the owners of both small- and large-sized boats can discover a product destined to drastically revolutionize the concept of on-board sanitisation.

We’re talking about Atomic3, the only device in the world capable of sanitizing the environmentseven in the presence of people without any risk to them. Unlike a traditional ozone generator, Atomic3 produces a small but constant amount of calibrated ozone which, added to the existing ozone in the atmosphere, kills any viruses and bacteria in the air or on surfaces, while protecting the health of people on board at the time, without exceeding the values established by the ACGIH (American Conference of Governmental Industrial Hygienists).

This particular sanitizer, designed to disinfect air and surfaces, is called Atomic3Air. But the range of Atomic products, made usingsuper advanced technology, also includes three types of water-specific products: Atomic3 Water and Atomic3 Pool, which sanitize the water and surfaces of tanks or pools, and Atomic3 Yacht, developed to sanitize (and keep sanitized) water tanks for human use, i.e. boat tanks, as well as autoclaves and well or irrigation water storage tanks.

Atomic3 revolution starts at the Marina di Varazze and climbs on board ships, yachts and boats 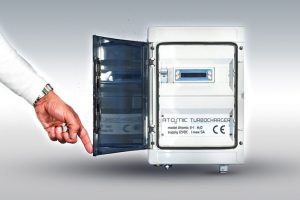 Through an easy-to-install immersed diffuser connected to a 7 mm tube, Atomic3 Yacht releases countless ozone-enriched air bubbles into the water which disinfect the inside walls of the tank, removing all patina and bacterial deposits. The device is also easy to maintain: you only need to simply replace the two rubber membranes annually.

“Atomic3 Yacht is the only water sanitizer in the world – says Marco Fois, Sales Director of Atomic3 – It is suitable for tanks, pools, fountains and, above all, for the tanks of recreational boats and large ships such the military ones, on board which the iron in the tanks tends to generate bacteria, algae and unpleasant odours. Atomic3 Yacht, which can be connected to household appliances such as air conditioners, washing machines and dishwashers, can keep the filters and mechanical parts of any tank clean, thus guaranteeing pure drinking water: you can drink it or use it to cook pasta. We have developed it for both large-sized boats and ships and have recently fitted it to the new Scanner Envy 1400. Now, we’re also developing ahydrogen model for engines that will drastically reduces fuel consumption and exhaust emissions”. The atomic revolution has just begun.