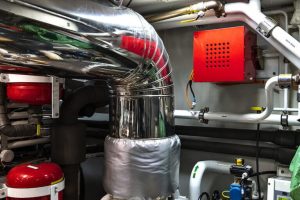 The AerPro Marine fire extinguishing system is effective, easy, affordable and modular: it is an excellent solution to be installed on board any type of boat.

We have visited the La Spezia-based Sanlorenzo headquarters and climbed on board the “Ocean’s Four” explorer to discover, accompanied by engineer Alberto Palazzo, the AerPro Marine fire extinguishing system developed by the Italian company Polytechno Engineering.

AerPro Marine is an aerosol fire extinguishing system that uses condensed potassium salts and can be installed in place of a traditional fire protection system.

These aerosol systems, unlike those using extinguishing agents such as CO₂, Novec or FM200, use mixtures of substances with formulas proprietary to each company, thus differing in performance, characteristics and certifications.

AerPro is the only US EPA-certified, non-toxic and sprinkler equivalent system, thus usable in all human habitable spaces. AerPro also holds around 40 other certificates worlwide that guarantee installation anywhere, with live systems, delicate mechanics or paper. The system has no nozzles, pipes or cylinders, is very compact and can be installed without mayor intervention as it only requires an electrical connection. 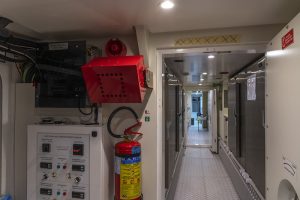 How does it work? At a temperature of 250 degrees, a chemical reaction (fast, but not explosive, incendiary or pyrotechnic) takes place between the potassium carbonate and nitrate of the solid compound inside the metal case of the AerPro. Through a process similar to sublimation, potassium aerosol is released in a very thin particulate matter, like a thick fog, which, in contact with flames, triggers a second chemical reaction.

Potassium binds to oxygen free radicals, triggering a powerful endothermic action, which causes a violent drop in temperature, removing heat only at the point of the fire and immediately extinguishing the flames.

This dense vapour is breathable and non-toxic, but it has the only disadvantage of removing visibility from the environment, so the following procedure has been studied.

In the vase of boats of over 24 meter, the permitted activation is only in manual mode, as the fire develops a siren sounds in the event room to induce evacuation and, in the meantime, the control unit immediately checks all the points in the system. To activate the AerPro, it is necessary to confirm the pre-alarm on the control panel, and then press the activation button for the emergency zone. The thermal activator in the compound heats up to over 250 degrees and the heat produces triggers an immediate chemical reaction. 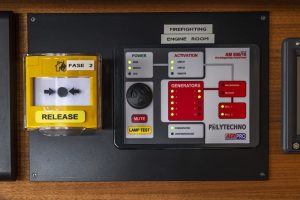 A very important factor that makes the systems extremely safe is the electronic control unit which, equipped with a bypass, makes AerPro’s operation infallible, even in the event of an electronic failure.

The electronic control panels in the various compartments are equipped with an emergency system that makes it possible to activate all AerPro units on the boat simultaneously.

On smaller boats, the system can start either manually or automatically, through the appropriate placement of temperature sensors, smoke detectors or temperature sensitive cables.

The system installed on this boat, for example, is quite comprehensive and protects fire-risk areas such as the engine room, laundry and refrigeration compartment, without impacting on aesthetics and design.

Compact and stand-alone systems can also be installed, suitable for example for the engine room compartment of sailing boats or the technical compartments full of electronic devices.

The AerPro system is sized according to the volume to be protected, the largest model being a cube with a side of 30 cm: from half a cubic meter upwards, everything is possible and modular. 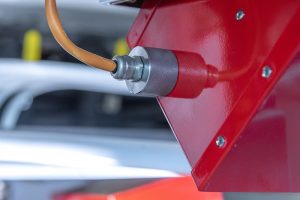 In the event of a fire, which is quickly put out with no damage, it is possible to replace the used AerPro with new ones kept on board as a backup (two bolts and an electrical connector). The lifetime of the compound is guaranteed for 15 years, and another major benefit is that the AerPro system does not require scheduled maintenance.

Potassium aerosol is non-damaging and non-staining; it is also suitable for archives such as the Veneranda Fabrica del Duomo di Milano, which has chosen AerPro to protect its precious works. Once cooled, some small residues of aerosol can be deposited on the surfaces, in an easily removable way that does not affect any support.

Ocean’s Four captain Giovanni Lombardi tells our microphones : ” Installation is quick, the system is compact in size, unobstructive and maintenance-free; operation is very easy, user-friendly and not dangerous for the crew“.

In conclusion, the system is extremely safe and highly reliable to protect the life of people on board and limit damage to the boat.

Transfluid hybrid and electric systems: a guarantee for the future