Astondoa AS8: the 100-year old Spanish shipyard, astounds with its new yacht model, presented from its facilities in Santa Pola, Alicante.

Art in movement in which functionality and an athletic and contemporary character in its lines dominate, adapted to the taste of 21st century clients who demand a personal look. 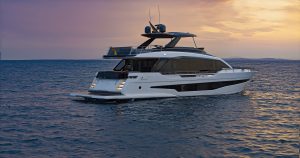 The Astondoa AS8 ships out with its 25-meter length and 6-meter beam and with a new approach to enjoying life at sea without any limits.  As a whole, the new Astondoa yacht has a sophisticated but visually simple aesthetic.

Boarding from the stern, the connection between the cockpit and the beach club enthrals, merging these two spaces with such harmony that the shipyard’s design team was able to convey the essence as well as magnitude of this elegant 82-foot yacht. The perfect orientation of the cockpit furniture, the glazed balcony and the design of the steps between both spaces, combined with the beach club couch, give rise to a completely avant-garde concept of space integration. 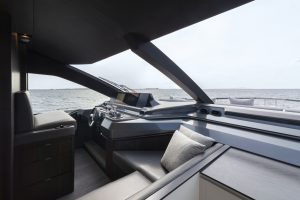 Getting to the bow through the two wide side corridors with a step at half length is extremely easy. The carbon fibre handrails humanise the path to the bow where they connect with the shipyard’s unmistakable emblem, the big steel A that looks ahead, symbolising the company’s innovative future.  Here, too, the design highlights the versatility of the logo that acts as a backrest for the small bow seat, under which are the mooring bitts, out of sight on deck.

The generous flybridge offers a contemporary design, sitting area, and has been conceived to provide a pleasant atmosphere of intimacy and privacy.

Astondoa AS8: art in motion

The interior design of the Astondoa AS8 conveys art in movement. Its large seven-metre-long living-dining room, with large glassed-in areas and low-profile side walls, offers extraordinary visibility and a spectacular feeling of being close to the sea.

The AS8’s kitchen cabinet has large front windows that let an enormous amount of light into the space, in which the ergonomic and avant-garde control panel of the wheelhouse stands out, resulting in a harmonious unit made up of two such different spaces of use. An ambitious project by the Astondoa team that is original and attractive. 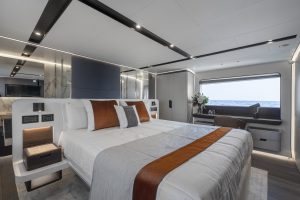 On the lower deck there are sleeping quarters for up to 12 passengers, accommodated in four spacious cabins. The shipowner’s cabin can be configured in two possible ways.  All cabins have en-suite bathrooms, spacious wardrobes, and plenty of storage.

Two crew cabins complete the sleeping quarters of the Astondoa AS8.

Fine, high-quality materials are present in every corner of the AS8, with white lacquers shaped in such a way as to give a sense of movement, very fine trims that breath elegance, and the leather panels with grey beige gradients, hand-made on site, putting the finishing touch on ‘art in motion’.

The matt wood panels add robustness to the overall aesthetic, as well as the bathrooms with high ceilings and transparency in steel and glass that enhance, if possible, the sensation of spaciousness.

Astondoa’s boats are the result of more than 100 years of experience and four generations. Throughout their history they have focused on technology, with design and innovation a fundamental part of their DNA.

Building an Astondoa boat requires passion and commitment. Each boat is 100% custom designed according to the needs of each customer. Each boat is unique, tailor-made down to the slightest detail. 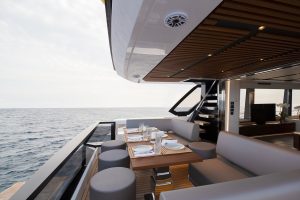 Since no two people are alike, no two Astondoa boats are the same.

Bering B77 explorer Veronika has been launched