Darwin 115 tastes the waters of the Middle Adriatic and will soon be handed over by Cantiere delle Marche to her owner, a fishing enthusiast. Here’s how the general trials attended by well-known designer Sergio Cutolo went.

“The name Darwin is an evergreen name, it never gets old and is always topical”. The highly experienced Italian superyacht designer Sergio Cutolo has just landed from the Darwin 115 trials and is certainly the right man to tell us what the recent launch of this brand-new 35-meter gentleman-explorer – latest addition to a lineage of classic boats that are very long-lived and still in demand – means for Italian yachting. As we were saying, Darwin 115 has already shown her credentials in the Middle Adriatics for a general test and soon, we can bet, she’ll start exploring the seas around the globe.

Cantiere delle Marche is spreading the news of the final negotiation: the Darwin 115 will be delivered around mid-September to an owner who is “passionate about fishing” and who, not by chance, “wanted to close the stern platform as if it were a fishing cockpit”. But that’s not all, and there’s still some time left for the interiors to be finished: sophisticated, penciled by Nauta Design, they will be enjoyed infused with the essential oil of a bleached oak wood, which is extensively present on board. 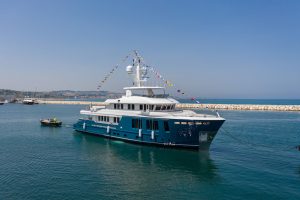 The design features a large master cabin on deck, characterized by full-height vertical sculpted windows that offer remarkable ventilation and light. On the steel hull and alloy superstructure, the “sugar paper blue” colour harmonizes everything in a classic trend. But the shapes are “muscular” and again: the Darwin 115 in the round hull “very soft to navigate in all conditions” shows a layout “reminiscent of a sailing boat in some ways” but also has features typical of a “classic commercial boat”.

The project executive paradigm includes “reliability, safety, and a rational layout”. Sergio Cutolo goes on to describe the Darwin 115 in an almost academic narrative: “ the 115 is the biggest of the Darwins, the first Darwin; a 86-footer was launched exactly ten years ago; in these ten years, Cantiere delle Marche has escalated in terms of market positioning to an incredible degree”. And even more, because sometimes engineering becomes poetry “during sea trials there’s the dream of seeing the flow of water coming out of the hull, which is nonetheless well protected by the moratina”. And on top of all this, there is a very large, comfortable engine room, which is the “dominant principle” of the Cantiere delle Marche.

“Darwin 115 is a boat with a hull suited to particularly hard sea conditions; the rudder has a heel, like on ships, so the propeller is enclosed inside this cage and is therefore particularly protected”, explains Mr. Cutolo. During the general trials off the coast of Ancona, the boat proved to be evolving “very well”, and even if we let go of the rudder it went straight; it was a beautiful day but with “a slightly rough sea, where the thermal had raised a small wave and then we looked for the deepest seabed”.

The Darwin 115 is designed to sail thousands of miles every year, it has an extremely sturdy hull, a range of five thousand miles, and a capacity of 55400 litres of diesel fuel. At the stern, the two large appendages give directionality and course stability, and there are two stabilizers amidships. Details: the stern flybridge has a hatch that allows the deck to be further extended.

As for the routine on board, convivial moments are reserved for the flybridge, sheltered by a very sturdy hard-top. On the main deck there is the master cabin and galley, all properly divided by highly insulating materials to reduce noise and vibrations.

The Darwin 115 has a maximum beam of 7.70 meters, with a total of 8 passengers accommodated in the four available cabins and seven crew members in a further four cabins below deck. The sundeck features a barbecue, sun loungers, a table for 12 and a bar.

In addition to the captain’s cabin, there are also large spaces on the bridge that are useful for long cruises, a small sofa that serves as an emergency berth for those on watch, but also for the owner if he wants to observe navigation. Moreover: “the upturned glass panes allow the dashboard to be positioned very close to the bridge but prevent it from being overly illuminated by the sun, making all the instrumentation clearly visible, and this is a typical feature of professional boats,” adds designer Sergio Cutolo.

“We are very excited that this experienced owner has decided to believe in us to build his Darwin, and we are proud of the trust he has placed in our team”: Vasco Buonpensiere, co-founder of Cantiere delle Marche, comments on the launch of the Darwin 115 with a frank satisfaction: “we did our best to satisfy the owner’s expectations”.

The crowing achievement is the result of years of commitment to the development of all the explorers that have built the reputation of the Ancona-based boatyard. Since 2010, Cantiere delle Marche has launched 32 yachts, defying the advanced financial crisis, and the Darwin contributes even more to the shipbuilding art of the Marche region. The extraction of the name of this superyacht speaks volumes and, even if abstractly, it also tells of the science of evolution and the vocation of those who invented it. In other words, the aptitude of the explorer, because Charles Darwin also commanded a brig, the Royal Navy’s HMW Beagle.