Behind the shining world of yachting, which many tend to see only as an icon of luxury, lies the hard work of many people who have contributed to making this sector unique and inimitable over the years. One of these people is undoubtedly Giorgo Casareto, Director of Marina di Varazze (and more), who in over fifty years of life has dedicated time, talent and dedication to the boating industry with the rare ability to always succeed in putting himself on the line and with the added value of having really started from the bottom to rise to the highest levels. A whole life dedicated to the world of the sea, which we wanted to collect and bear witness to in this video in which the Editor-in-Chief of The International Yachting Media Luca D’Ambrosio interviews Giorgio Casareto.

Our chat with Casareto goes back a long way, to the very origins of his passion for the sea, which began at the tender age of five when he went out with his parents on a small sailing boat. Later, with the purchase of a larger boat, Mr. Casareto began to undertake longer navigations, such as a tour of Corsica or a voyage to Barcelona: a love that became work when Giorgio was first employed in a small boatyard as a worker and then at Azimut where he still works today. The Marina di Varazze director has very vivid memories of his apprenticeship, which are also fun to listen to, such as his first job scraping the hull of a boat that was then immediately dismantled. 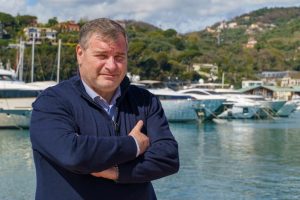 “An incredible adventure began at Azimut, one that I would never have imagined would have reached its current goals,” says Giorgio Casareto in our video interview. “I went from working as a factory worker to after-sales and sales, until I was asked to set up the new Savona office, which I ran until 2008. After that I moved to the historic Avigliana plant, until 2011, when a new path began in Marina di Varazze, where they needed a person to take over the management of the company”.

In short, a story that starts with a humble job and ends with great professional satisfaction. This is why Giorgio Casareto’s advice to young people who would like to enter the boating sector is to “really believe in it”. In fact, he explains, “many young people with a passion for the sea can achieve extraordinary results, but my advice is always to start from the bottom: even if you have a respectable school education, getting to know this sector starting from the lower levels helps a lot to learn how to manage it”.

But we don’t want to anticipate anything else about the interview, so we invite you to watch the video, where you can get to know Giorgio Casareto not only from a professional point of view but also from a human one; that is, the side made up of memories and anecdotes from which there is always something to learn.

Porto Montenegro and Drydocks team up to create Adriatic 42