A magnet for glamour, good times and living life in the fast lane, Miami is for those who dare to challenge the status quo. From darkened decades and a tarnished image of cocaine cowboys and gangsters; to the brighter art deco era, vivacious supermodel movement, and arrival of the Versace & company fashionistas – the sun-soaked metropolis has seen it all!

Flipping the pages of its kaleidoscopic history book, the Magic City’s one prevailing constant enduring the test of times is that, it sets the bar for being the No. 1 bespoke, adult toy capital of the world. Whether a sultry Sunseeker is sashaying along the waterways, or a ferocious Made In Italy production is parading past in a blur of horsepower… all one has to do is look toward the seas and streets of this sophisticated society, to be swept away! 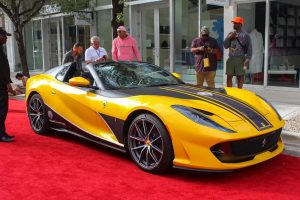 Case in point: This February, diehard boat and auto aficionados were dazzled with a double dose of awe-inspiring, innovative machinery to rave over starting with the quintessential vessels decorating the quays of the Discover Boating Miami International Boat Show (MIBS) and finishing in the Design District for the fifth annual Miami Concours 2022 from Northeast 39th Street to the palatial Paradise Plaza promenade.

Nothing speaks “VIP status” like rolling out the red carpet. Row after row, Bugattis, Lamborghinis, McLarens and Mercedes were meticulously showcased next to eyeball-expanding hypercars on the tapestries alongside the European boutiques and adjoining emporium of architectural treasures. Exotics and Espresso hosted by Prestige Imports on top of the Museum Garage also garnered its fair share of revving under the hoods and raving among the crowds. 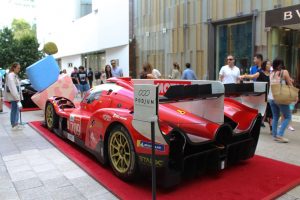 Of the most notable figures driving away with Miami Concours accolades for his personal and production collection of exquisite autos, was James Glickenhaus. If the name of the investment professional, movie director and legendary collector from Scuderia Cameron Glickenhaus rings a bell – he’s the visionary behind the Ferrari P4/5 originally an Enzo Ferrari but redesigned by Pininfarina in the style of a P Series 1960s race car.

Also being honored was John Hennessey, the celebrated American hypercar manufacturer behind the one-off version of the Hennessey Venom F5, powered by a 6.6-litre twin-turbo 1,817 hp V8 engine. Valued at €2.56 million ($2.8 million) and one of only 24 in fabrication, the F5 has been causing quite a commotion with its forecasted speeds of up to 500 km/h (311 mph).

Interestingly, the full-throttle storm of speed Venom inherits its “F5” moniker from the apex of the Fujita tornado strength scale , which to no surprise, measures tempests of 321 km/h (200 mph) or faster, in that category.

An additional highlight along the half-mile-long esplanade involved a slight bit of mathematics on my part. I’m certain I calculated more than ten prominently positioned, finely polished Paganis in the mix; while on the other hand, I’m positive there was only one legendary Ferrari F40 campaigned by F1 world champion Nigel Mansell. The classic was stealing hearts in front of the yellow Fendi facade.