Filippetti Yacht, when grace meets vigour: here is the Navetta 28

After almost a year of intense work to expand its range of displacement yachts, Filippetti Yacht unveils the Navetta 28 concept to the public. This latest creation from the Mondolfo-based shipyard confirms the special features of the range, such as great cruising range and compliance with environmental sustainability criteria.

Navetta 28 is another Made in Italy nautical gem and – we expect – will certainly be one of the jewels to talk about at the Miami International Boat Show. Filippetti Yacht will be present in the DG Dock at this overseas event with the 55 Sport, which is increasingly winning over the American market with her sporty, elegant lines. During the boat show it will also be possible to meet the CEO, Giovanni Filippetti, who has confirmed his presence for the entire event.

Navetta 28 is a spectacular superyacht with an overall length of 27.65 meters, a beam of seven and four decks. But what stands out most are the superbly crafted proportions, expressing overall splendid grace and vigour. 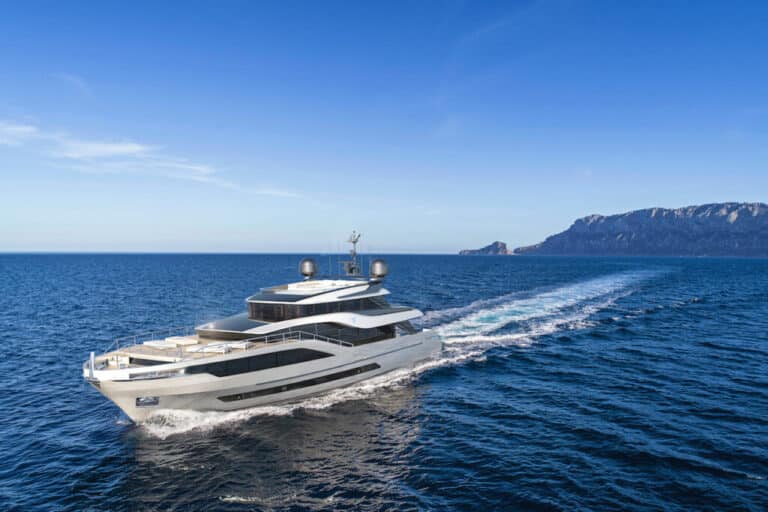 Overall, the family feeling of the famous N series, which is always the hallmark of Filippetti Yacht, persists. But when it comes to aesthetics, the Navetta 28’s geometries have been lightened and she is more streamlined on the water. The final effect confirms the imperious forms typical of this type of boats, but cancels out its sometimes awkward appearance. 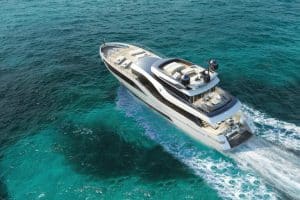 Navetta 28 is the result of a consolidated collaboration with the well-known designer Fulvio De Simoni, who has contributed to characterizing this superyacht with decidedly modern, high-impact yet sinuous features.

This is because Navetta 28 is a full-fledged member of the range of displacement yachts built by Cantiere Filippetti, but Fulvio De Simoni‘s pencil has managed to fascinate connoisseurs by going further. How? By eliminating, we repeat, the effect that weighs everything down and forgetting the rough shapes we see elsewhere in the market segment.

Lightness and vigour come together in a harmonious encounter. And it is almost a balance of opposites. The imposing vertical glass surfaces dominate the rest of the structure. “Fulvio De Simoni has an innate ability to enhance contrasts,” explain the shipyard, and how could he not be right?

The outdoor areas of the Navetta 28 are designed to enhance the full enjoyment of cruising and moments of relaxation when at anchor. The Fly deck is very large and can be summed up as a veritable terrace overlooking the sea, open to 360 degrees. From up here, everything is at its best to enjoy breath-taking views..

Moreover, the sundeck is extremely functional and separates slightly into its own rationalised geometry, rising above the small quarters in front. The aim is to guarantee a certain amount of privacy (always appreciated) even during mooring manoeuvres.

If you look carefully, this main deck is a truly imposing bow area, useful for welcoming guests who take advantage of a maximisation of space that has been taken to the top. 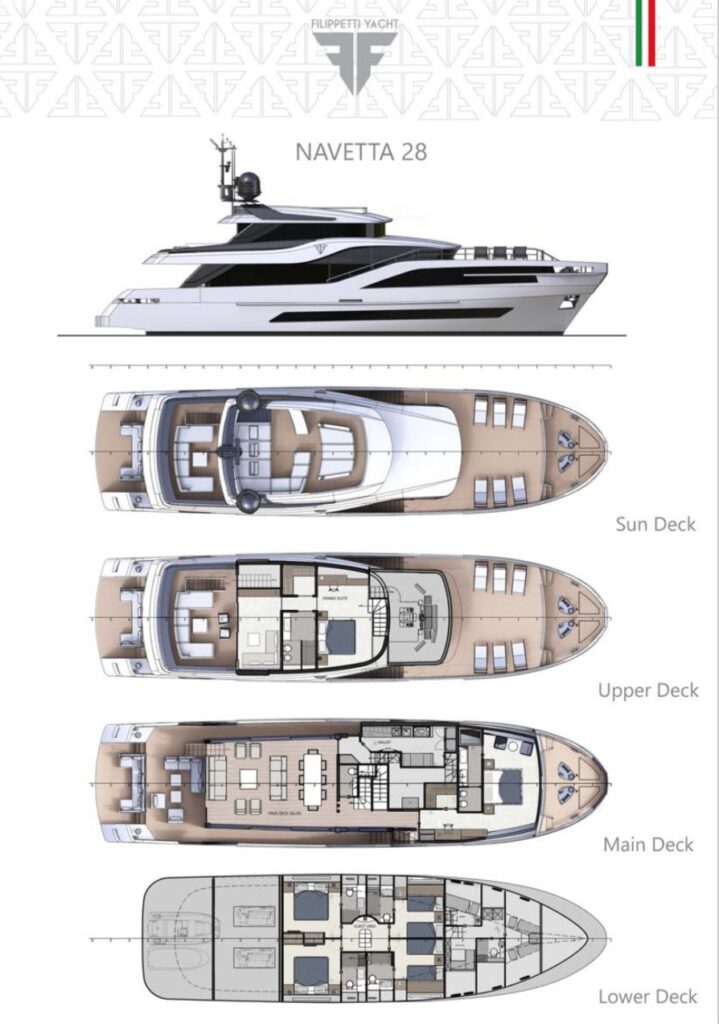 Not surprisingly, the Filippetti boatyard’s aim was to characterize the Navetta 28 with an “unprecedented” sense of spaciousness both inside and out. The layout is also “fully custom” and this gives the owner an almost total customisation experience.

So much freedom means the owner gets his superyacht, almost like a bespoke suit and, as Giovanni Filippetti explains: “This is a real rarity for a yacht of just 28 metres”.

The Navetta 28 is powered by two 800hp MAN engines. And it’s all sacred power that contributes to a cruising speed of 13 knots, the top speed being 14.5 knots. One curiosity: this superyacht has stabilizing fins installed for maximum on-board comfort.

As for the boat’s homologation and category, Navetta 28 has RINA CE – A. The fuel tanks have a capacity of 20,500 liters. This means that her cruising range is as high as 3,000 nautical miles, for endless cruises in search of freedom.