For the nautical set not familiar with boating on New York waters – the East River is as bustling as Times Square – but exhibiting traits consistent with that of a tidal strait, it’s not always in a nice and welcoming way. 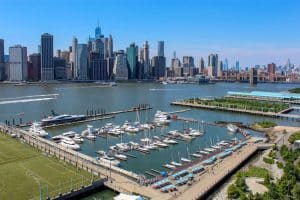 The new One 15 Brooklyn Marina found this out less than a year after its 2016 grand opening.

The deluge of colliding currents building up multi-directional momentum from the crossroads of the rivers and the Atlantic Ocean were wreaking havoc on the facility and the watercrafts moored along the quays.

Consequently, the writing was on the (sea)wall for an overhaul!

Lamentably, the marina’s initial protective shield was only deflecting a portion of wave energy back into the river and failed to reduce the tidal impact hammering through the aperture under the piers. A restructuring with extensive sustainable design elements was in order to prevent further irremediable damage.

But the tides don’t tell the whole story. The river is a melting pot of moving crafts cutting their own courses with distinct “coming and going turning points.” For example, the daily cavalcade consists of: commercial freighters and tug boats; Jet-skiers chasing the transom chop from the many recreational vessels and sightseeing cruises crammed with selfie-snappers; the FDNY and PDNY 911-style dashing between destinations; and not to forget the non-stop (and I mean non-stop) low-hovering helicopters shuffling the suited CEOs back and forth to their Manhattan meetings. 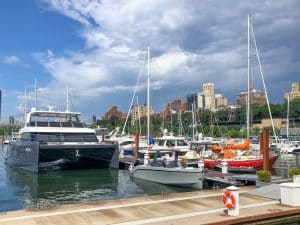 However, as hectic as the above sounds, the true “turning point” came in 2017 when the high-speed ferries increased the frequency of their services, further heightening the persistent rolling wave action. LITERALLY!

An engineering team was brought in and their high-tech analysis and testing on how best to combat the volatile condition resulted in steel wave attenuators set on deep draft steel barges as the solution.

This combination cushions the marina basin with a gentler undulation by reducing the size and energy of incoming swells and eliminating unnecessary wave movement.

One 15 Brooklyn Marina CEO Estelle Lau tells me, “The marina was initially designed using all Seaflex anchoring but we found that the increased boats and ferries on the waterfront were too powerful for the system. So we built the new attenuators using the same concept as the New York ferry landings, putting piles in to further strengthen the system – doubling the width and tripling the depth of the attenuator.” 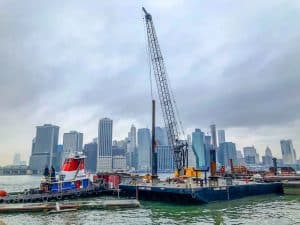 Singapore-based SUTL Group, noted for its stunning marinas across Asia, and the consulting firm TMS Waterfront, were responsible for reconstructing the eight-acre facility which today features 102 slips accommodating boats up to 300 feet including deep draft ocean-going superyachts. Since re-opening in May of 2019, the $28 million dollar multi-phase design project has yielded continual praise and positive results; nonetheless, it was met with a series of challenges along the way which were to be expected:

2- The position of the R subway train running under the facility required a reduction in piles near the tunnels and prevented the use of anchoring and cables.

3- Taking all precautions, a sophisticated monitoring system had to be installed to avoid the impact area of the tunnels during the pile driving along the attenuator.

4- Disruptions to the summer operations at the marina needed to be minimized.

The engineering crew was resilient in complying with the compulsory rules and restrictions mandated during the course of the daunting infrastructure refurbishment. First, the large concrete blocks initially installed to anchor the docks were repurposed to the inside dock on the marina’s south side. Next, two 185-foot steel barges dubbed as Little Bear One and Little Bear Two, and Polaris the third goliath-in-size 300-footer with a 30-foot beam and 10-foot draft, were secured to the seabed floor, followed by ballasting down the attenuators on piles and driving them into the bay. 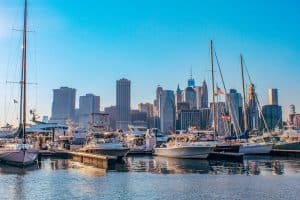 Preserving the panorama projected from the backdrop of the Big Apple’s south side thanks to careful placement of the pilings was another defining achievement of the high-profile project. Yet, there was more to cheer about than the view.

Given that the marina is home to the Community Dock, it offers a selection of low-cost programs and activities allowing locals to interact one-on-one with the harbor, making it accessible for all to navigate whether you’re a boat owner or not.

OSCAR continues to effectively observe the horizon as SEA.AI