In an increasingly frenetic world in which everything and everyone appears to hurtle at breakneck speed, with the Motopanfilo, Benetti offers the promise of a return to a more languid era, to a time brimming with tantalising tales of the glamour and exploits of the international jet set.

The Motopanfilo, a 37-metre displacement yacht made in composite, encapsulates how to transport classic tradition stylishly and unerringly into the future.  Far from merely taking a stroll down memory lane and simply creating a retro revisitation, Benetti, together with Francesco Struglia for the exterior lines and Lazzarini Pickering Architetti for the interiors, have shaken up an old favourite and given it a delightfully fresh and contemporary makeover that includes all that modern technology and techniques can offer.

Today’s iteration of the Motopanfilo Benetti delivers generous, light-filled spaces, almost uninterrupted visual contact with the sea and a series of vast terraces that descend right down to where they touch the surface of the water. The overall illusion is of an enormous protective shell that is ready to protect and cherish whoever steps inside. But beyond its physical attributes is the charm and sophistication of a bygone era and a gentle, unassuming elegance that transcends fashions and trends.

Motopanfilo Benetti: a glance back to the past to design the future

Motopanfilo is an Italian word that was used in the early Sixties to denote the large motoryachts that very quickly became synonymous with glamour and the jet set lifestyle, and much-coveted objects of desire among socialites, royalty and prominent personalities from the worlds of business and entertainment. Benetti was one of the first shipyards to produce these yachts, launching much-loved models such as the Delfino, the Gabbiano and the Mediterraneo. Before long these boats, typically between 18 and 30 metres, became something of a status symbol and were a popular sight cutting through not only the waters of the Italian and French Rivieras, but fashionable spots the world over, helping propel Benetti to fourth position in the global yacht manufacturers list as early as 1970. 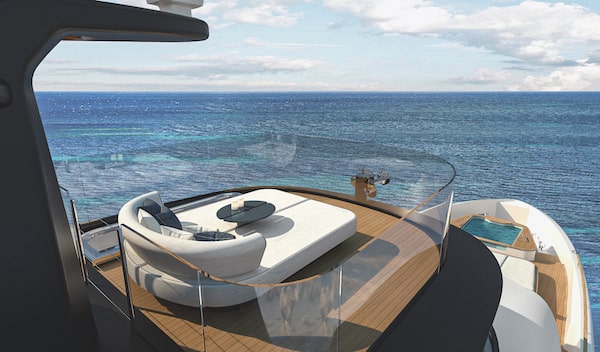 Clients ranged from traditional royalty such as Prince Rainier of Monaco to pop royalty, with David Bowie, according to Janine Allis’s biography “The Secrets of my Success”, hosting a myriad of famous guests on board his Benetti, including Mick Jagger, Robin Williams and Michael Caine.

The design of these boats was extremely clean and linear, with very little in the way of embellishment or decoration. The hull and superstructure were designed as a single volume, connected to each other by one or, in some cases, two perfectly coplanar surfaces, creating an elongated profile that ended in a classic rounded stern. The interiors were typically warm and welcoming, featuring an abundance of wood in both the structure and furniture, together with white sofas and touches of blue, a combination that became something of a hallmark style.

The first thing that catches the eye when looking at the new Motopanfilo is the exterior volume. The midship construction elements that linked the hull and superstructure and created the visually harmonious single form that is the essence of the original Motopanfilo Benetti have been preserved. The tapered silhouette with its clean-cut lines, and austere, elegant contours, appears almost like a beautifully-crafted protective shell that envelops and cossets all those within it.

Conceived as an evolution of the original wooden cap rail that edged the bulwark, the new “ribbon” is a modern 45-degree chamfer that defines the bulwark and runs seamlessly from the main deck to the upper deck overhang to provide a contemporary decorative flourish that simultaneously evokes the past.

The fusion of classic and modern-day influences finds its perfect expression in the transom where the lines are completely integrated into the hull volume, in the manner of its iconic Sixties forerunners. There is a twist, however, which comes in the form of a beach club, designed to respond to the expectations of today’s boat owners. This entails a slight difference in the overall shape, with the central face of the transom sharply inclined downwards so that once it opens up, there is an ample bathing platform, completely given over to sun lounging, with the garage housing the tender and jet ski tucked unobtrusively away in the side of the yacht.

For a change of view, guests can adjourn to the Observation Deck, once carved out around the main mast but on the new Motopanfilo Benetti positioned above the hard top and conceived as an intimate fourth deck and a truly private retreat, simply made for soaking up the sun by day or relaxing under the stars at night. 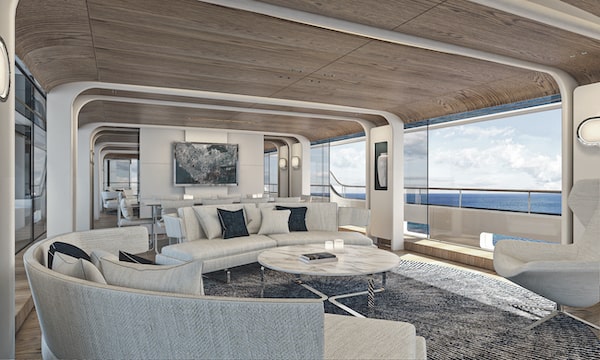 The interiors are by the renowned Lazzarini Pickering architectural firm, which was also behind Benetti’s 2004 Sairam, the first superyacht to introduce modern interiors at a time when classic styling was still predominant.

In seeking to rediscover and reinterpret many of the traditional elements of the original motopanfilo in the name of a new style of classicism, the designers came up with the concept of the interior as the skeleton of a large whale, with its framework providing a rhythm to the space. From here, the idea evolved to delineating the various spaces through an architectural approach that reimagines traditional beams as structural rib bones and essentially dematerialises the walls. It is left to the vast lateral windows to contain the space, and the effect is one of immense spaciousness and openness, which even the furnishings cannot detract from. Artful use of mirrored surfaces to frame the windows expands the perception of interior space and amplifies the views of the sea and sky outside.

The structural rib bones give order and sense to the interiors, defining the different zones and providing punctuation points to mark the use of different materials and allow for interesting décor and functional interpretations. 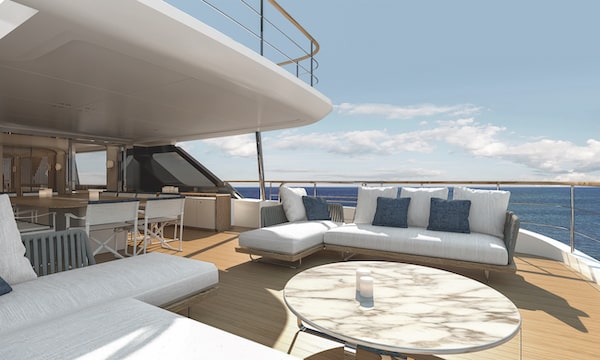 In the saloon, where the wooden walls of yesteryear have been almost completely replaced by enormous panes of glass, the tradition of wood and its enduring links with the sea have not been overlooked, but instead of the usual mahogany tones, it is used in a warm, light oat colour on both floors and the gently curved ceilings, heightening the sense of airiness and lightness throughout. Towards the stern the ceilings take on a double-curved effect, testament to impeccable craftsmanship.  Additional nods to seafaring themes can be seen in the touches of white and blue wood, introduced in elegant new hues.

Below deck, the theme of respecting the innate character of each environment can be seen in the choice to not straighten the cabin walls, instead allowing them to follow the gentle, relaxing curve of the hull, while the ubiquitous rib structure is here produced in an inversion of colours and materials.  From the lobby a spiral staircase winds its way around a central mast that rises through two decks like a spinal cord as it accompanies guests to the sky lounge on the upper deck.

The owner’s suite is located in the bow of the main deck while the four comfortable guest cabins, all able to accommodate double beds, are situated on the lower deck where, upon request, a small sauna can be installed.

The displacement hull can reach a maximum speed of 16 to 18 knots, depending on the motor capacity selected.

Welcome to the new Benetti Motopanfilo, a boat designed to take you back to another era, where you are Suspended in Time.

Vanguard: to “explorer” the world onboard a SPA