The expedition superyacht 37XP made its world debut at the Cannes Yachting Festival held from September 7-12. 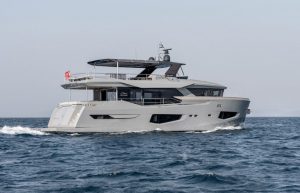 37XP is the third yacht launched by Numarine, the Turkish shipbuilder with indisputable leadership in the superyacht market. With 37 meters of beauty and advanced technology, the 37XP flaunts the decisive character of an oversized trawler, which she inherits from her younger brother, the 26XP (in the photo on the left), which was also be on display at the Cannes Yachting Festival. The lines of the 37XP are even more aggressive, and the flybridge in contrast with the rest of the range is more imposing, extending over a total surface area of 80 square meters. On the overhead roof there are more than 44 square meters of solar panels, which, absolutely eco-friendly, guarantee a peak power of seven and a half kilowatts that can be stored in the on-board lithium batteries.

37 meters for the superyacht 37XP

The superyacht is powered 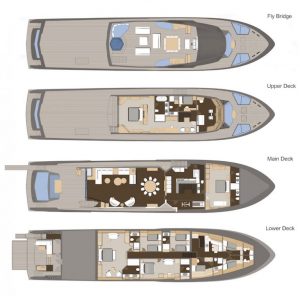 by twin MAN 560HP engines. Accommodation is for10 guests divided in 5 cabins below deck. Added to these are the quarters for 8 crew members plus the captain’s cabin.

The bow points with an almost warlike pride to the sea and also plays on a sharp pyramidal geometry that outlines the end, as if to protect the master cabin inside. Looking at the 37XP on the main deck, the saloon and cabins benefit from an important transparency to the light. And if you should see it sail away: “On the stern, the beach club includes an interior lounge and a platform practically at the water’s edge“, explain Numarine.

The 37XP boasts a maximum cruising speed of 14 knots, plus RINA certification for trans-oceanic crossings. The average cruising range is 6,000 nautical miles, with a cruising speed of 8 knots. Inside, the luxury dimension is all about well-being, with a cinema room, gym and Jacuzzi, which in turn has a full-service bar. In addition to the charm of Numarine’s Eastern Mediterranean shipbuilding art, the 37XP also features a great deal of Italian style, with Umberto Travaglini in charge of naval architecture and design by the Milan-based studio Hot Lab.

Numarine penetrates the US market

Denison Yachting, which has been brokering and selling yachts since the post-war period through 22 offices in the States, has been delegated to follow the operation for the sale of the nautical asset. “Numarine has gone beyond the imaginable to welcome this client into its family and continues to enter the American market, to which Denison Yachting proudly brings its support. Patton Marine is supervising the construction of the yacht on behalf of the owner; the expectation is for a magnificent final product”, said Alex Clarke of Denison Yachting. The intervention of Numarine’s head of sales, Ali Tanir, was also fruitful and he commented on the final negotiations as follows: “This sale is a further confirmation of the importance of the American market and the success of the XP series. I would like to congratulate and thank the Denison Yachting partners for their impressive work and the magnificent achievement”.