Amer Yachts premiered two superyachts in Cannes, one of which was the Amer 120. We spoke on board with Barbara Amerio, CEO of the Permare Group

Amer F100 and AMER 120 are two superyachts that embody the very future of yachting, with a focus on real progress and maximum attention to the environment. We climbed on board the Amer 120 and it was undoubtedly one of the most interesting yacht seen at the Cannes Yachting Festival. It is also because it doesn’t flaunt pharaonic luxury, but it does pay attention to ultra-luxurious, prestigious details, designed, as we’ve said, to be ecologically friendly.

It is true that 60% of customers choose Amer Yachts for charter, including the Amer 120. The four double cabins, apart from the master cabin, are in fact designed to be equally balanced, guaranteeing equal treatment in terms of layout, space and views from the water’s edge. So on the Amer 120, the focus is on the boat’s “quietness, and low consumption, which “allows to have at least one extra holiday day”. 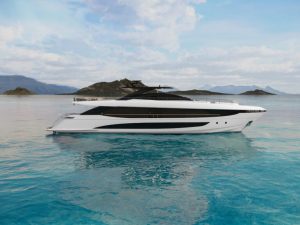 As far as the environment is concerned, Barbara Amerio explains that the big step will be the use of hydrogen to which the Amer Yachts Research Department is devoting itself by “carrying out studies” on how to develop a hydrogen engine room. In the meantime, they will try to move into the green revolution with “more complex engine rooms” and by using photovoltaics, even though there aren’t many surfaces to produce enough energy. At the Energy Challenge in Monaco, a very fast Italian boat from Unibo, explains Barbara Amerio, won with a mix of alternative energies that included, in addition to batteries and photovoltaics, “hydrogen“. What’s more, Amer Yachts is researching alternative materials and “would like to become the first shipyard to use a completely organic composite, i.e. fibre, resin and gelcoat that are all recyclable“. The news is that tests have already been carried out and the results are positive.

Climbing on board the Amer 120, leaving behind all the hustle and bustle of the Festival, is a direct entry into the paradise. It’s even more so if you’re accompanied by the CEO of the Permare Group, Barbara Amerio, who introduces us to the Amer 120, explaining how the shipyard has adopted “a new construction system to ‘devitrify’: a term that responds to our desire to use less composite. A material we replaced with metal and glass windows, two elements that can be disposed of. So,” continues Barbara Amerio, “we have reduced the amount of composite on board by four tonnes with the devitrify project”.

Only the hull and the flybridge structure remain in composite. “The result was 97 square metres of windows, making Amer 120 the biggest Volvo IPS-powered boat in the world.”. This doesn’t detract from the fact that the superyacht cruises at a top speed of 28.2 knots: a total of 4,000 horsepower divided between four engines, which however respond to a 25 per cent reduction (in Horse Power) compared to the competition “while guaranteeing the same speeds and keeping consumption down”. The figure of “552 litres” refers to consumption at a cruising speed of 24 knots. 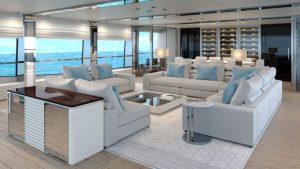 you can breathe fresh air, because the ventilation is really well thought out “with a view to saving energy“. Light floods in through the large vertical windows, which have been used to limit the use of composite in the superstructure. As mentioned above, these openings in the central part of the boat become almost “balconies” on the main deck, at the height of the side-decks and amplify the natural sea air current, to the point that there is practically no need for air conditioning, with considerable energy saving.

The aft terrace (with a mega Jacuzzi) and cockpit saloon become a single out/inside door environment. There is also a decorative focus on recovering materials. Cork was even used on the aft deck. And the interiors feature natural materials such as Indonesian teak, handcrafted in Italy, which looks like an all-natural antique floor. The wood grain is combined with the contrasting use of mirror steel, mirrors and transparent volumes, explains architect and interior designer, Stefano Tini. The door locks are designed to power any technologies that can be associated with the handles, including presence LEDs and possible alarms. The mink nuances are beautiful, and a transparent cave à vin capable of holding 60 bottles sets the scene in the maindeck lounge. “Relaxing light colours, apparently minimalist design, use of eco-leather”. 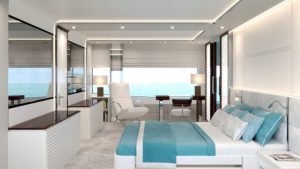 The owner’s area immediately sees a Technogym wellness feature in the vestibule. The wardrobe room is very elegant. The full-beam master cabin is “scenic, high, with a bathroom in Verona limestone“. The king-size bed has a headboard characterized by sinuous movements that recall the turn of the wave. In front of it, a large television is set in a mirrored panel that makes it paradoxically visible but invisible. Along the internal stairs connecting the main deck to the flybridge there is a hidden door connecting with the crew cabins.

The helm station is worthy of a spaceship, the steering wheel bears the Amer logo, the windows are transverse. On-board instrumentation also includes a unique cetacean detection and waning system. On the starboard side there is a courtesy sofa for the captain. Moving to the foredeck, before the quarters, there’s another large Jacuzzi which precedes a U-shaped sofas facing the sea. Amer 120 has an overall length of 35.54 meters and a maximum beam of 7.40. The draft at full load is 2.11 meters. Full load displacement is 150 tonnes. The approximate price is 12.8 million euros.