Construction of the Wedgeline Hybrid 77, Fabiani Yacht’s revolutionary craft that is set to become the first zero environmental impact superyacht, started a few days ago in Pisa. Equipped with long retractable solar panels, the Wedgeline Hybrid 77 will allow silent, zero-cost and non-polluting cruising, which will also allow it to enter protected marine areas, usually forbidden to motor boats.

“The first model will be ready by 2023 and will change the yachting world forever,” says Maurizio Fabiani, far-sighted designer of the Wedgeline Hybrid 77. “There are many beautiful boats in the world, but none currently have a level of technological innovation comparable to ours.” 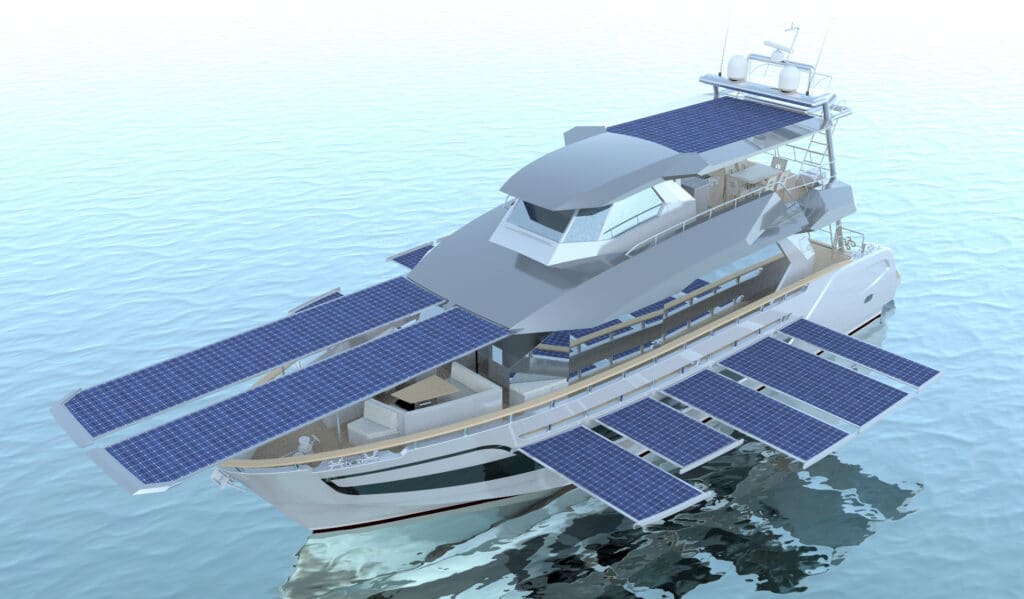 The highlights of the Wedgeline Hybrid 77 are not limited to the solar-powered power supply, but also concern the meticulous design and extraordinary hydrodynamics of the boat: “The hull width of this 77-footer will be the same as the 100-footer model,” explains Mr. Fabiani, “which means it will have unrivalled stability compared to other boats of the same length on the market, which usually have narrower hulls”.

In addition, continues the engineer, “we have worked hard to obtain the lowest possible inclination of the propeller shaft, in order to make the best use of the energy produced to push the boat in the navigation direction, rather than downwards as happens with the shafts of other boats, which tend to look towards the bottom of the sea”. 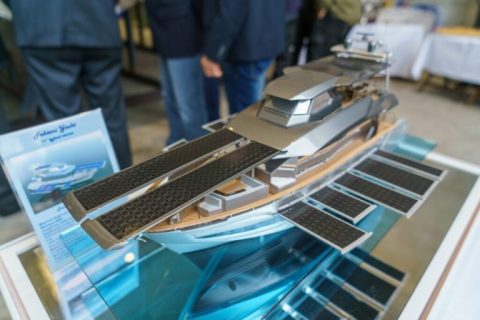 In addition to the Wedgeline Hybrid 77, Fabiani Yacht has also designed the 101 model, whose construction will begin shortly and will be completed in 2023. The bigger sister will have no less than six cabins compared to the four of the 77 model, including a panoramic one in the bow, and above all a helm station located on the flybridge, a real living space with sofas and air conditioning.

With the Wedgeline Hybrid 101, Fabiani Yacht has carried out a cruise simulation from Livorno to Corsica in order to demonstrate the total absence of emissions and costs even on long cruises: “Thanks to the substantial battery pack,” Mr. Fabiani explains, “it will be possible to travel at 8 knots starting from Livorno and stopping for a dip on the island of Capraia before reaching Corsica, from where we can leave the following morning for Elba, to spend a second night before returning to Livorno. With the Wedgeline Hybrid 101 it will be possible to tackle this three-day, two-night voyage exclusively using electric motors powered by solar panels, so in total silence while cruising and, above all, at zero cost and without impacting on the environment”.

The real gem of the Wedgeline Hybrid 101 is the patented platform, which runs on special rails and can be submerged a metre underwater or raised to flybridge level, from where it is possible to dive directly into the sea or create a parapet with ropes and stanchions in just a few moments, for a breathtaking view of the sea.

EXPV, the new explorer superyacht by Harrison Eidsgaard is radical

Sustainability discussed at the Monaco Yacht Show. The yachting industry updates and evolves