Acala is a 43-metre superyacht commissioned by an experienced yachtsman who wanted to explore every corner of the world. For this exploration superyacht, Cantiere delle Marche has collaborated with Horacio Bozzo Design studio for the first time.

It has been commissioned by an experienced yachtsman who, over years, owned luxury yachts and then become a repeat client for CdM, a yard which gained his full confidence having enjoyed the feel of comfort and safety of his previous Acala, a Darwin 102, cruising from the Med to the Pacific Ocean and the Atlantic.

Acala was designed by exploiting the Cantiere delle Marche’s ability to meet the needs of the most demanding customers and, for the first time, collaborating with the internationally renowned yacht design studio Horacio Bozzo Design.

Striking at first sight is her severe profile combined with the elegance of a luxury yacht that will stand the test of time. The side view of this superyacht is dominated by the large windows on the main deck, the mullions of which seem not to join the superstructure, giving a sign of discontinuity to the design.

The clean and somewhat austere lines of Acala, characterized by a protruding bow and a compact superstructure, are the foundation of the ‘explorer’ spirit combined with the elegance of a luxury yacht, resistant to time and fashion.

The displacement hull is designed by Sergio Cutolo/Hydro Tec, with a gross tonnage of 440GT to ensure comfortable sailing even in harsh weather and sea conditions and with a more than transoceanic range.

Acala is designed to reach the farthest corners of the world and accommodate guests and crew for a long time: thus the owner’s request was for spacious, luxurious, comfortable, well-equipped and harmonious interiors.

The interiors of Cantiere della Marche’s superyacht, designed by Mexican architect Simon Hamui, are luxurious and relaxing at the same time, to make guests feel comfortable with both beach clothing or formally dressed for a dinner.

A large lobby sits in between the main salon and guest night quarters. The full beam Main deck, from amidship forward is dedicated to guests and Owners. Three large Vip and extremely comfortable Owner suite to starboard side are flooded by natural light from large windows. Two twin cabins are located on the Lower deck.

The crew has five cabins on the lower deck, alongside a roomy crew mess opposite a professional galley and the Captain has his own cabin on the Upper deck next to the helm station.

Exteriors: designed for all situations

A large and partially shaded Sun deck perfectly integrated into the profile provides the social hub for Acala’s guests with an al fresco dining, bar, vast sunbathing area alongside a second swimming pool. A dumbwaiter connects the galley located on the Lower deck to all deck, Sun deck included, to convey food and drinks and ease the work of crew.

For indoor entertainment, there is a lounge on the main deck and a large panoramic sky lounge with dining area on the upper deck.

For relaxation, on the other hand, a particularly large cockpit features dining and lounging areas, a swimming pool and lots of space to relax

Acala is an explorer superyacht, built to reach those remote areas where assistance is almost impossible and you have to rely on what you have aboard.

The watchword in the mechanical design was independence, and the engine room is one of the sources of this independence: its equipment stands out for its cleanliness and functionality, with all systems and machinery set up for easy maintenance.

Acala has a full displacement naval architecture by Sergio Cutolo/Hydro Tec offering large volume (440GT) and the smoothest of travel even in rough seas ensuring excellent comfort and total safety. Engineering has been developed by the yard technical department in collaboration with Hydro Tec. Like all explorer yachts built by Cantiere delle Marche, the new addition features a thick and robust steel hull and light aluminium superstructure.

Cantiere delle Marche claims for Acala a range of more than 5,000 nautical miles at 10 knots and a top speed of 14 knots, thanks to the geometry of the hull, the 62 400-litre tanks and the extremely parsimonious consumption of the two Caterpillare C32 Acert engines of 746 kW each,

A detailed work and the debut of a prestigious collaboration

The Acala superyacht inaugurates a new collaboration with Horacio Bozzo Design who designed her lines.

“The aim of our design work is the pleasure of seeing the owner’s desires taking shape and recognizing himself in it,” says Horacio Bozzo, yacht designer and naval architect –“Designing an explorer for an experienced owner who grew up around boats and understands yachting perfectly, is very gratifying. We started from a white piece of paper and brainstormed a lot with him to fulfil the whole family needs.” 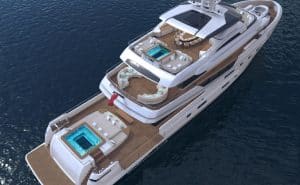 “I am delighted and proud with this milestone launch,” Vasco Buonpensiere, Cantiere delle Marche’s co-founder and Sales & Marketing Director, says – “The trust this owner confirmed in CdM gives us the highest reason for pride. It is a statement of appreciation for both our yachts and ourselves as a team always committed to the owner’s satisfaction. The mutual trust established between this client and CdM team has been pivotal to the good result of the whole process that led to the completion of such a complex project”

“Within our team we joke that we have built the smallest 80-metre yacht ever!” concludes Mr. Buonpensiere with humour.

“Cantiere delle Marche’s strategy to dedicate one slot per year to fully custom projects proved to be successful and extremely important for the technical growth of the shipyard – Ennio Cecchini, CDM CEO says. “Building these one-off vessels is a great opportunity for our team to learn something new and to work out of its comfort zone: this is the only key to move forward and improve, in our opinion, and that’s why we opted for this strategy.

Being chosen by experienced owners such as this gentleman who decided to have his second yacht built by us, after having owned yachts built by the most reputed Northern European brands, is the best possible prove that our commitment, dedication, technical skills and quality are second to none.”