That swing bridge across the Osor Channel

Across the Osor Channel

Those who dock on Selve Island must decide between to options: to continue towards “Punta Bianca” and therefore the Kornati archipelago or to head north and choose between open sea and the picturesque village of the Osor channel.

Me and my friends have arranged to meet in Pantera Bay but some unexpected events now force us to change our itinerary. 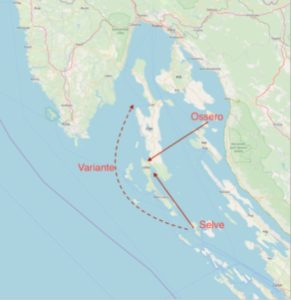 I have disappointed my expectations and, in order to console me, after leaving the eastern port of Selve, the safest and most equipped one of the island, I head for Neresine, an agglomerate of houses that overlooks a small recreational port, which has been aspiring to become a true “marina” for a very long time.

We’re just two miles from the narrow passage that, every day, joins Cres and Lošinj islands at 9:00 and at 17:00 by a swing bridge.

Tourists, drivers and locals attend the passage of the boats that parade, rigorously one at a time, between two wings of curious: first those sailing from the south to the north and then vice versa.

” We can’t miss Osor”, my guests from Trieste had said on board, also stating that “the bridge is the old one, the same that once was on the Ponterosso Channel in Trieste”. But it’s a lie because this bridge is almost new today while the historic one dating back to the late 19th century was “similar” to the “Ponte Verde” on the Ponterosso Channel only because it had been built in the same establishment and therefore looked similar.

But people of Trieste like this ideal contiguity of the old Austro-Hungarian provinces and the nineteenth-century “fake news” continue to circulate. Moreover, the city of Ossero, the ancient capital of the Assirtidi, rich in Greek, Roman and Venetian remains, was a very important center of the Eastern Adriatic and it is no coincidence that today, although reduced to a village of a few hundred inhabitants, it is still called the”Pompei of the Kvarner”.

The remains of its vestiges would deserve a visit, but the anxiety of crossing this artificial channel- 150 meters long and only just 5 or 6 meters wide- takes over. The official pilot book does not lie: the currents can be very strong and even exceed five knots here.

The feeling we get is just like the one I have often felt in the mountains, after an abundant snowfall just before the last climb, when those before me, equipped with no chains and proper tires, so they started to slide. What to do? I check the engine revs to see how much I can resist but the Ossero Canal has been crossed. I get distracted to see, on my right, the remains of an ancient fortified wall; it would be nice to dock for a while but we go away straight in order not to hinder the others waiting for their turn to go south, with their boats in balance, at the edge of this artificial river.

In a Croatia that has immediately succeeded in sucking “euros” instead of kunas, after having devoured bmarks, shillings and even many liras in every favorable tourist occasion, I am surprised that nobody is there to exact a toll for the crossing of this strategic channel; so, I can but rejoice at this unsuspected gift and I go on sailing along the western coast of the island. The new destination is Cres, with its harbor protected by all winds and its comfortable and safe marina.

Random encounters with old friends take place on the pier:  “Where are you going?” “Where do you come from?” “You have the new boat!” “But that one isn’t the boat that was built for ……” “Ok!”

Some racing boats are also arriving with their beautiful kevlar sails ! Before dinner, there is time for a few jokes and some tips: “The Osor Canal?” “Cross it, it’s interesting!”.

Later, an oil lamp will be turned on, someone will take his guitar and, in the pause between two songs, my promise is extorted by a friend of another boat:  “When we return to work, I hope that you will not tell anyone that I sang, until late at night, on a pier in Cres the songs of our unforgettable youth “.